For those gardeners with acid or neutral soils the Paciﬁc Coast irises are well worth growing for their exquisite beauty and general ease of cultivation. With the exception of Iris douglasiana they will probably not survive on alkaline soils.

Interest in these irises, popularly known as “Californians” was sparked by Dykes who wrote about them in “Dykes on Irises” and who cultivated most of the seven species recognised in those days, namely Iris bracteata, I. douglasiana, I. hartwegii, I. macrosiphon, I. purdyi, I. tenax, and I. tenuissima, the last one being described by Dykes himself. Since then other species and subspecies have been found and recognized, including I. munzii, I. chrysophylla, (which Dykes grew but made synonymous with I. macrosiphon) and the beautiful and much smaller species I. innominata.

In earlier days most species were unobtainable, or if they were oﬀered were proved not to be true to name. This was partly due to the little known fact that hybridisation is common between species which ﬂower at the same time, but since the publication of the work of Dr. Lee W. Lenz, “Revision of the Paciﬁc Coast Irises”, knowledge and understanding has greatly increased.

The irises are mostly found distributed through the mountainous and wooded areas within the great ranges, westwards from the western slopes of the Cascades and Sierra Nevada to the coastal ranges. They do not grow north of Puget Sound, or in the Great valley of California. Most of the species generally occur in areas of lightly wooded, sloping, well-drained ground, in neutral to slightly acid, often gritty soil which contains some humus. The mean temperature is 50oF (10oC) with winter rainfall and long dry summers.

The series Californicae is a group within the sub-section Apogon, or beardless, rhizomatous irises. They usually grow in small and compact clumps with slender wiry rhizomes and narrow grass- like foliage. However, at least two of the species can grow much larger, with leaves that are long, broad and sword-like. The stems are unbranched with the exception of I. douglasiana, which is unique in that it can produce branched stems on mature plants which can carry as many as eight or nine ﬂowers per stem. The majority of species have one or two ﬂowers per stem, with I. munzii producing spathes with up to four ﬂowers per stem.

The ﬂowering season in their natural habitat is from mid-March to mid-June, with the peak towards the end of April to early May, and the Californian species usually ﬂower earlier than those in Oregon. Altitude also aﬀects ﬂowering time, and seed pods begin ripening accordingly, the latest ripening by July and August. The ﬂowers are comparatively large for the size of the plants, having well-developed standards and falls very often distinctively veined and marked with rich colours, and colour is extremely variable even within a species with a limited range of colours, often varying from very pale to quite deep, mostly in a range of blues. I. chrysophylla is one species contributing yellow to the colour range. (chryso – meaning gold) Variations can also occur in both ﬂowers and foliage in different seasons and conditions. Some species are now very rare and considered endangered. The chromosome count for all species and subspecies of the series is 2n = 40 (somatic). They are all fertile and hybridisation within them is very likely where they are growing within range and ﬂowering simultaneously. They are relatively close to the series Sibiricae, especially the Chinese species such as I. chrysographes and I. forrestii which have the same chromosome count. These inter-series hybrids have occurred in gardens, and are all sterile. They can be diffcult to grow in some conditions. Plants are easiest to grow when produced from seed which germinates readily when fresh. Care must be taken when transplanting PCs and the optimum time for this is when new white shoots are showing on the rhizomes in the autumn.

In 2004 a group of thirteen members of the NZIS travelled to California to attend the AIS Convention in Fresno, California. During that time the group was privileged to join several AIS members given special permission to go into the Sierra Nevada forest area to view Iris munzii growing in the wild. 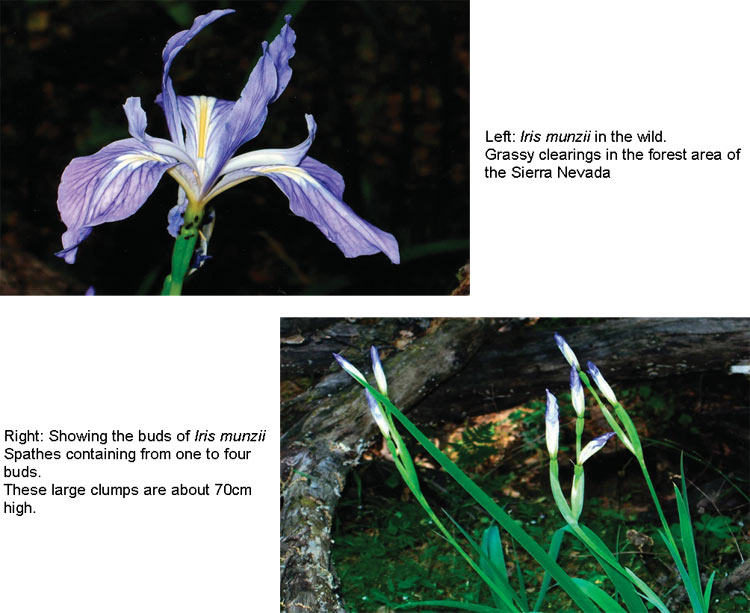 This beautiful species is one of the larger growing with large ﬂowers in a range of colours from pale powder-blue to lavender and purple, and is noted for the turquoise ﬂash on the falls. This distinguishing factor denotes the presence of I. munzii in many hybrids.

After this exciting adventure the group continued their travels to Oregon, on the way having the opportunity to see I. douglasiana growing wild among other low-growing native ﬂora on the exposed cliﬀ tops of the Monterey coast where they enjoy the beneﬁt of  sea spray and fog. They were also seen growing wild near the Golden Gate Bridge in San Francisco Bay. 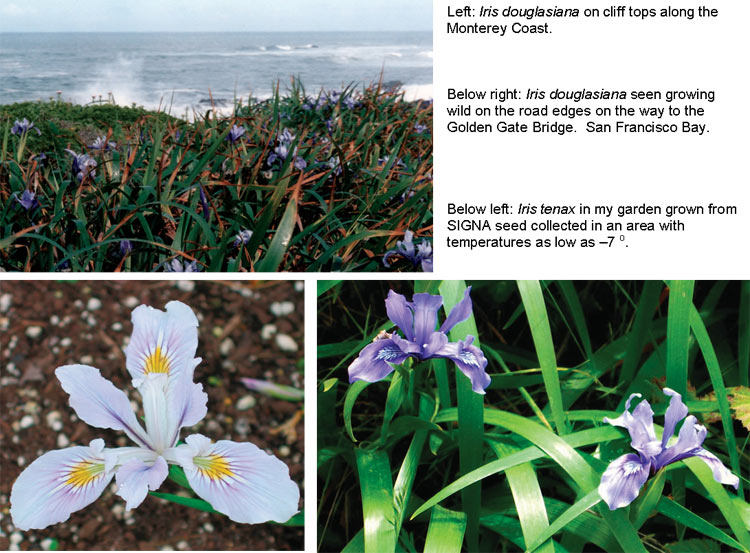 Further north I. tenax could be seen by the highway growing in wild patches in its preferred habitat on the edge of woodland. I was fortunate to be one of this group of people who also attended the Median and Dwarf Convention in Portland, Oregon, where we saw PC hybrids growing in many gardens as part of the Convention, and were also able to meet Joe Ghio at one of his iris patches where he grows and hybridises beautiful Paciﬁc Coast irises. Included here are some photographs of the irises we saw growing in the wild, and also some American and New Zealand hybrids.

Acknowledgement:     A guide to PACIFIC COAST IRISES Victor A Cohen

All photos by Stephanie Boot.