A History of Louisiana Irises 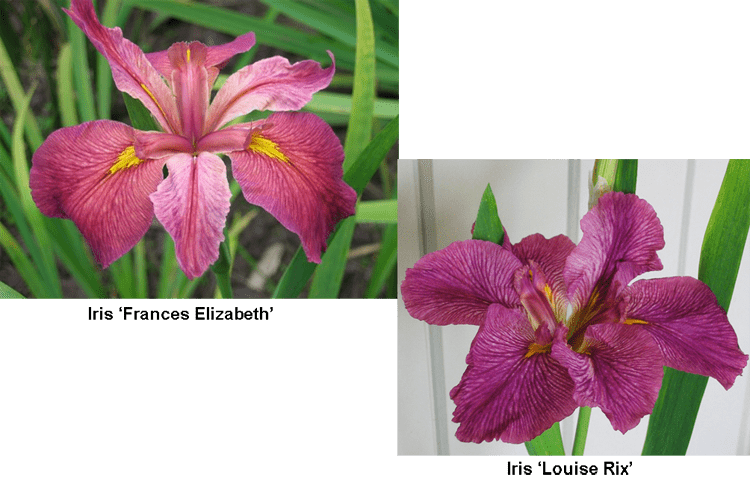 The picture of ‘Frances Elizabeth’ and ‘Louise Rix’ are courtesy of Stephanie.

Louisiana Irises comprise a unique group in the iris family.

Among all irises Louisianas are perhaps the most distinctive in colour and in form. They exhibit an incredibly broad colour range and were significant in providing the colour red to the iris spectrum.

Louisiana irises belong to the subsection Apogon, meaning “without beard” or beardless, of the series Hexagonae of the genus Iris in the family Iridaceae. Hexagonae are so named for the six prominent ribs on the seed pods. Louisianas consist of five species most of which are indigenous to a limited area of south-central Louisiana and the Gulf Coast marsh areas from Texas to Florida. Iris brevicaulis and I. fulva extend north to the Mississippi Valley and Iris hexagona is found in the south-eastern states. The others of the species are I. nelsonii which was known as the Abbeville red, and was important for introducing the colour red to new hybrids, and I. giganticaerulea. Abbeville yellow was discovered in the late 1930s.

The earliest date that I could find was 1788 with the description of I. hexagona by Walter, then 1812 when John Bellenden Ker-Gawler described I. fulva and I. brevicaulis.

The first record of any hybridising was around 1910 by William Rickatson Dykes of Great Britain, whose ‘Fulvala’ (1910) and ‘Fulvala Violacea’ were seedlings from I. fulva x I. brevicaulis. E. B. Williamson, also of Great Britain, produced ‘Dorothea K. Williamson’ from the same parents and registered it with the British Iris Society in 1918. It is interesting to note that Louisianas are now grown in every continent except the Arctic. This is due to John K. Small whose untiring dedication liberated Louisianas from the swamps and introduced them to the world.

In the Bay of Plenty we have had our own Hybridiser, Sam Rix, who won the Mary Swords DeBaillon Award in 1965 for ‘Frances Elizabeth’. He grew his irises on the site where the two tower blocks now stand at the Mount. His other registrations were ‘Billie Louise’ 1957, ‘Petunia Butterfly’ 1958 and ‘Louise Rix’ 1978. Mr Rix was the first person to win the Mary Swords DeBaillon Award outside the USA. This is the highest award bestowed on an iris by the Society for Louisiana Irises, and it has since been won twice by Heather Pryor of Australia.

Heather came to the Mid North Cconvention in 2004 and gave a talk on their hybridising objectives, including ‘Water Sprites’ which have a shorter stem. They have had dozens registered and Stephanie Boot and Darlene Cook imported many of these.

My own growing of Louisianas has been interesting in that I found while they like water they don’t like water that is not moving. When we sold our first house in Whangarei we bought an acre an a half from a farmer who still ran young bulls on it after we had paid for it. As this was in the late winter it was pugged very badly. I planted my Louisianas around the dam where there was a spring. In the summer the water table dropped and the water sat in the holes the cattle had left. The Louisianas that were sitting in these holes started to rot. After some investigation I found that they like moving water, so I pulled them out and put them at the top of the clay bank they thrived, so it goes to show they will grow anywhere. The rhizomes tend to come to the surface of the ground so need to be mulched so as not to burn.

P.S. Iris nelsonii is now considered to be a stabilised hybrid of natural origin.