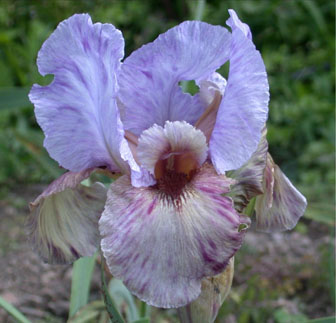 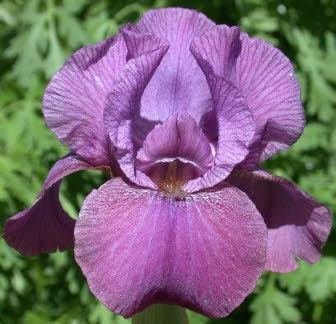 Aril species irises include oncocyclus, regelias, hexapogons, psammiris and pseudoregelias. The common characteristic of these very different species from which the term “aril” arises is a white appendage on one end of the seed. This appendage or aril varies in size in each species.

Arilbreds refers to hybrids from crosses of the aril species and hybrids with other bearded irises.

The flowers of the pure arils are absolutely stunning, usually large and often with the standards larger than the falls. There is a great variety of colour including spots, dots and blotches adding interest and variety. The rhizomes and leaves on the other hand, tend to be small and insignificant. The plant has a summer dormancy to help it through the rainless summers of the countries of origin. Israel, Jordon, Syria, Lebanon, Turkey, Iran, Iraq and also in the dry mountain valleys of Siberia, Mongolia, Nepal and Tibet. In these countries various species grow in valleys and on mountain ranges, some at high altitudes. They are now protected in most of these countries as they have been plundered for export and have become scarce in many areas.

Arilbred irises are more hardy and are able to withstand the NZ climate better. The arilbred irises also have some branching which gives more flower than the pure aril with only a terminal bloom and one more bud.

If you wish to give growing these beauties a try the current recommendation is to plant the rhizome in gravel over a rich loam in a raised bed. The roots will go into the loam and the rhizome held above the soil in the gravel and should therefore not become waterlogged. They do need to be shifted every 2 to 3 years so they do require some effort.